“As Her Mind Collapsed, I Was Awakened”: The Rugs of Ann Clarke 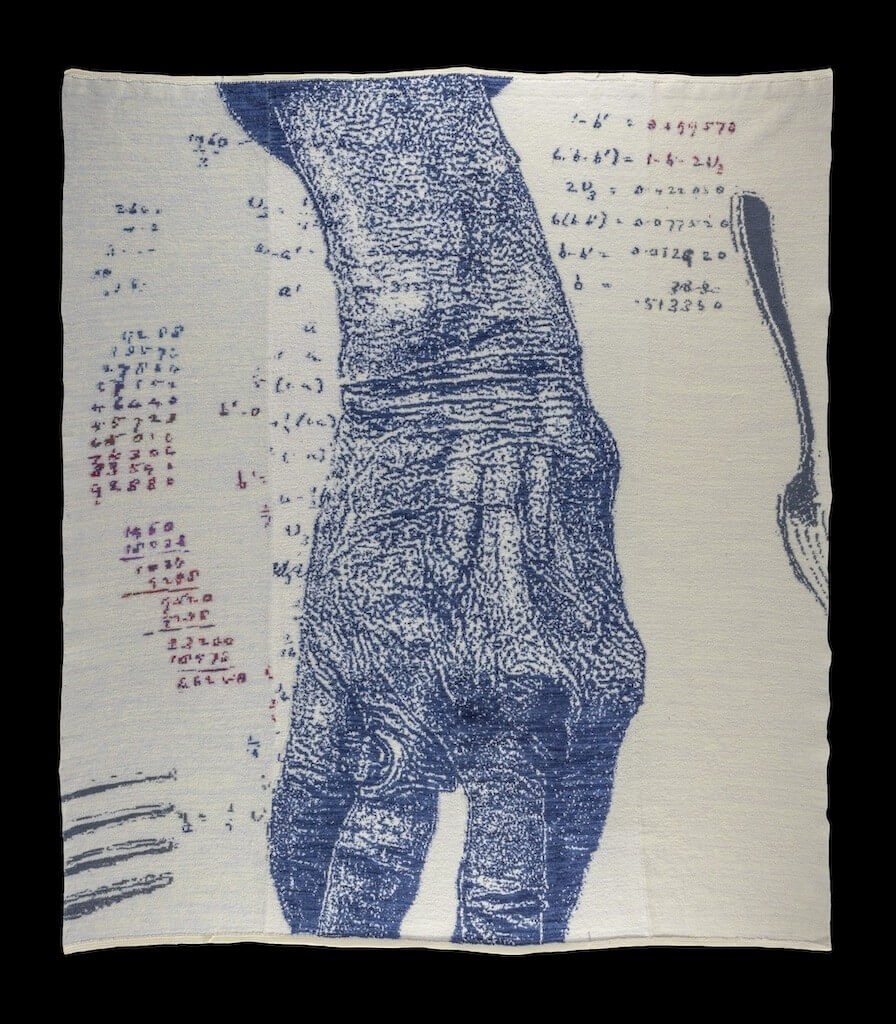 The exhibition “As Her Mind Collapsed, I was Awakened”: The Rugs of Ann Clarke spotlights a selection of five monumentally scaled rugs by artist Ann Clarke. She lives and works in Syracuse, New York, where she is on the faculty of Syracuse University.

The works featured in this show deal with a particularly sensitive and personal subject: the artist’s aging mother, who suffered from dementia and died at the age of 100 on December 1st, 2020. Several works depict her mother’s age-worn hands and eyes. Up close, one can discern that these body parts are built from individual carpet fibers; that each tuft and thread of color seems like a “cell” of her mother’s body, or a “pixel” of a parting photograph, or a detail of a last memory.

These rugs deal with the topic of memory in multiple ways. Clarke produced them while her mother was still alive, suggesting that the process of remembering, recording, and grieving her mother’s life is memorialized in their form. The rugs might therefore be understood as a mournful “awakening”—a sharp awareness to precious details seared into memory. Additionally, the forms in the rugs may suggest her mother’s battle with preserving memory as her “mind collapsed.” For example, notice the note-like forms containing rows of letters and numbers, which simulate scrawl on a notepad. These forms suggest her mother’s attempt to reconstitute eroded memory by means of repetitive writing exercises.

Clarke’s technique also evokes memory. Her rugs represent hours of concentration on a hand-operated knitting machine in which a new thread is introduced for each color change. The artist is constantly checking back, concerned with remembering her thread: which color to cue into the machine, which knot to tie. Furthermore, exceeding the width-limit of her machine, Clarke hand-sews panels together into a larger rug, thereby arranging incomplete segments into a complete composition—in much the same way that we may assemble partial details into a coherent recollection.

The rugs also poeticize an altered relationship, one that Clarke has described as mother and child interchanging roles—young caring for old. We might see this not only in the work Mother and Child: Day which features the vivid silhouette of a child, but also in Clarke’s process of felting her rugs. When her panels are sewn together, and her rug is complete, she takes the last step of machine-washing the whole work. In so doing, she shrinks and entangles the fibers into their noticeably soft but firmer, or “felted,” texture. The threads lose their autonomous identities, no longer traceable with the eye, they are now jumbled into a complex embrace. Perhaps like the circumstance of mother-becomes-child-and-child-becomes-mother, this new felted entanglement is too tight for a single thread to stay simply itself.

As such, not only in form, but in process, Clarke’s rugs evoke the complex topic of memory(loss) and relationship, from the perspective of a daughter, and an artist, losing her mother to dementia.