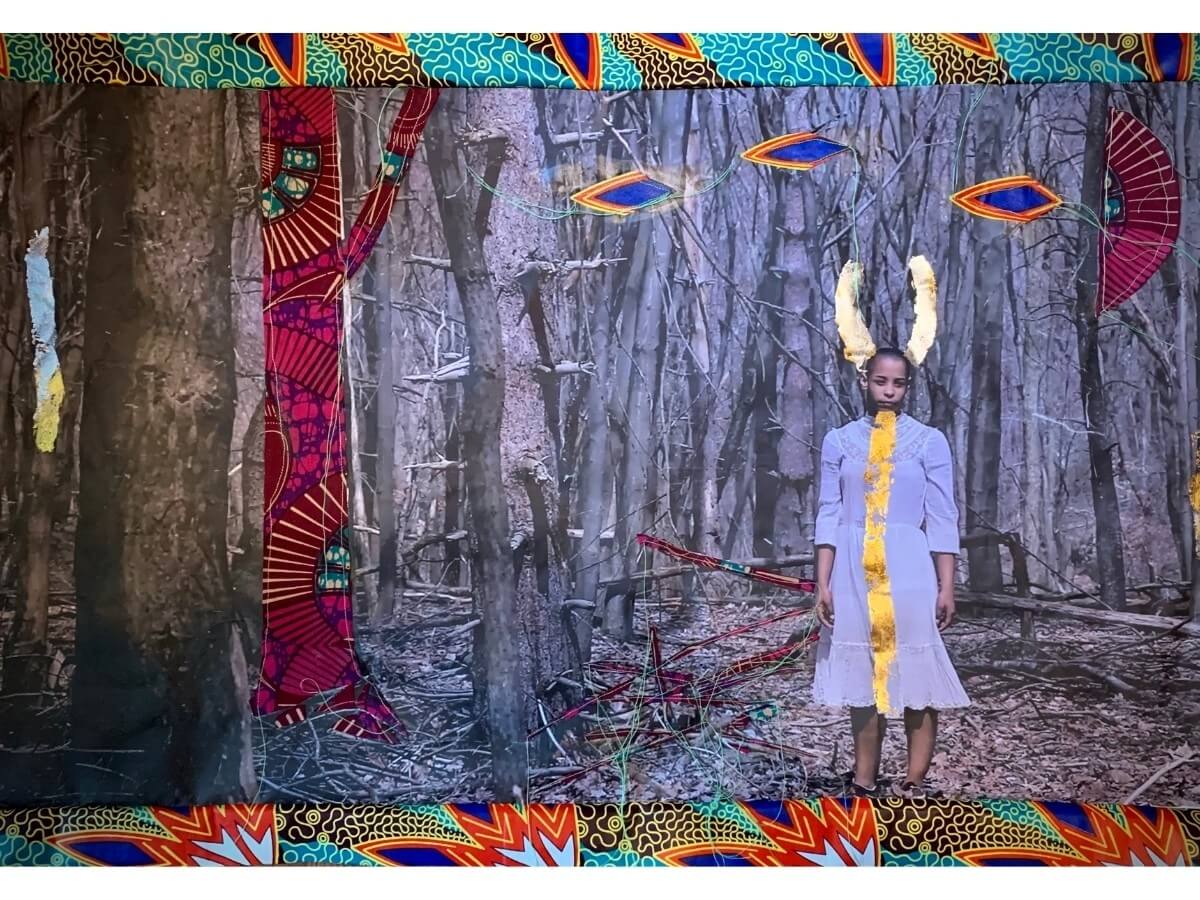 This exhibition will debut a new multimedia installation by artist Alisha B. Wormsley including dozens of new works from 2021, shown for the first time. The exhibition foregrounds the artist’s celebrated engagements with Black futurism—a genre of reimagining Black life often with a futuristic aesthetic. The imagery in this exhibition draws, in part, from her established body of work, Children of NAN. This is what Wormsley describes as:

“an archive of objects, photos, video footage, films, sounds, philosophies, myths, rituals and performances that I have been compiling for over a decade to document the ways that Black women care for themselves, each other, and the earth.”

While the word “archive” may seem to suggest a fixed past rather than futurity, Wormsley’s Children of NAN employs the archive as a means for futuristic ends. Specifically, it makes a new archive of Black women—an archive that has been largely absent due to slavery and its afterlives—with art that conjures the presence of both fictional and real, both contemporary and future Black women. This is an archive, in other words, that imagines new possibilities of recording and asserting the presence of Black women. As such, Wormsley presents a precise and apt apparatus for Black Futurism, named in her title for the exhibition, an “Advanced Technology.”

Wormsley’s exhibition at HAM will feature this important project. Her work will spread across two gallery spaces. The first-floor gallery will feature a series of films from this archive projected onto surfaces. Together this display of films will form a kind of repository through which viewers can virtually enter the archive that Wormsley has recorded and conceived.

An adjacent, larger, white-box gallery will feature twenty-two quilts that Wormsley has created from large photographic wall panels culled from her Children of NAN archive (images above). She has cut and shaped these photographs, and adorned them with fabric borders, thread, and other mixed media collage. These quilts will be installed across the space, forming a maze through which viewers can zigzag. This staging will also include several stained-glass altars, handcrafted by Wormsley, among other objects that evoke a shrine, worship, and divine adoration—underscoring the profound care Wormsley has for the people represented in this display, and the mystical ideas her work engages.

Wormsley’s exhibition will show that the aesthetic terms of Black futurism are broad and, like 2001 A Space Odyssey (Kubrick, 1968), bridge a vast temporal range. Importantly, Wormsley’s title for the exhibition uses the word “Remnants” to describe her archive of Black women that she also names an “Advanced Technology.” The word “Remnants” gestures to a belatedness—as if the viewer has found Wormsley’s art in the gallery centuries in the future, only to find it as rubble, as “Remnants.” This belatedness evokes a temporal paradox, casting the archive both in the past (we find a remnant), and the future (an advanced technology). This paradox suggests that Wormsley’s archive is the stuff of a fictional domain. Her work therefore may relate to what art critic Carrie Lambert-Beatty has called “parafiction”: the deliberate production of a fiction, distorted history, or fabulation as art. This fictionality serves Wormsley’s project, allowing her archive of Black women to exist within the expansive formulation of art per se, and not be burdened by science or objectivity. Not producing an ethnography or anthropology that might risk entrenching the study of the raced body, her work suggests the parafictional, or relics, somehow, about the future of Black life.