Companion Species (At What Cost): The Works of Marie Watt will spotlight two textile works assembled from panels of cloth embroidered during sewing circles (images above). Watt pieced together these smaller panels into two monumental tapestries: in 2020, the 16-½ -foot-long Companion Species (At What Cost); and, in 2018, the 17-½-foot-long Companion Species (Calling All My Relations). Marie Watt (born 1967) is an American artist and citizen of the Seneca Nation of Indians, one of the six tribes of the Haudenosaunee Confederacy. Watt has continued a tradition in Indigenous art, in which Indigenous insight is engendered at the exhibition venue.

About her sewing circles, Watt reports that “stories and talk tend to flow,” bringing people together, and that “each person’s stitch is unique, like a thumbprint. As the threads intersect and blend, I see them as a metaphor for how we are all related.” There will be a Watt sewing circle on the occasion of this HAM exhibition project. It will take place on December 8th at Marc Straus Gallery in New York City.

Indeed, at the center of this show, are Watt’s diverse textile works. The selection presented foregrounds what she calls “Iroquois protofeminism and Indigenous teaching.” These include at least two overlapping topics: the recognition of Indigenous matriarchies (predating modern feminism by centuries, hence Watt’s use of the prefix proto); and the recognition of Indigenous ecological traditions of profound interconnection between people and the Earth.

Watt uses language as one way to speak to these topics. For example, she has beaded the words “proto” three times at the center of Companion Species (Saddle), another work featured in the show; and she has embroidered the words “mother, mother” across the span of Companion Species (At What Cost). Such language may address the authority of Clan Mothers in Seneca tradition.

Many of her words also may suggest the importance of interconnection and of kinship. Indeed, terms of kinship populate the monumental Companion Species (Calling All My Relations). The very words “companion species,” headlining this exhibition and anchoring many artwork titles, also suggest that connections extend beyond humans: interspecies relationality. Watt reminds us that “in my tribe, we consider animals our first teachers.”

We must grapple with an advanced form of interconnection to one another, the plants, the animals, etc., and the Earth.

This exhibition furthermore features wall text prompts composed in collaboration with Watt that invite the viewer to consider some decolonizing ideas brought by her artwork and also by her community engagement practices. After Watt and the curator collaborated on these prompts, an independent designer schematized the wall text font and colors to subtly play with and against—to seek to trouble—museum display conventions. In both form and content, this special text works on decolonizing this institutional space. 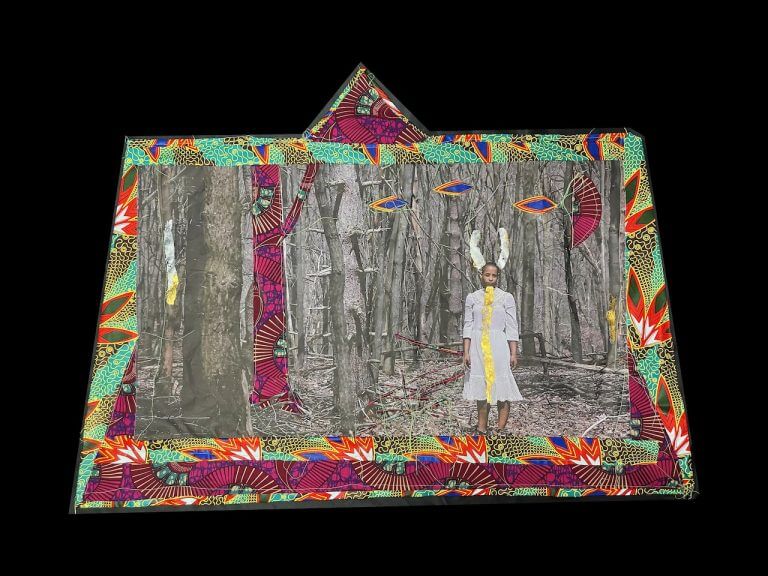 Alisha Wormsley: Remnants of An Advanced Technology focuses on Wormsley’s well-known work with Black futurism, a genre that reimagines Black life with a futuristic style. The show incorporates images from Wormsley’s established body of work, Children of NAN, which can be described as an archive of objects, photos, video footage, films, sounds, philosophies, myths, rituals and performances she has been compiling for over a decade to document the ways that Black women care for themselves, each other, and the earth.

This exhibition debuts a new multimedia installation by Wormsley, including dozens of new works from 2021 shown for the first time. Curated by Jason Vartikar in collaboration with Wormsley. 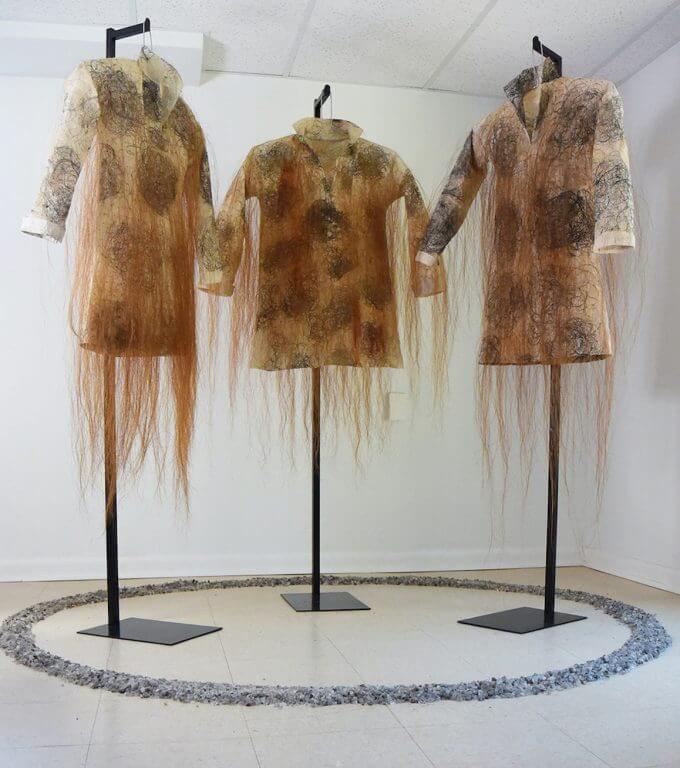 Liz Mitchell, Lead Us Not Into Temptation. Image courtesy of the artist.

Doug Herren: Color-Forms/Ceramic Structures features the whimsical, vibrant pieces of Philadelphia-based artist Doug Herren, whose sculptures appear to be comprised of common objects like building blocks, pipes, and fittings, but in unexpected and quirky combinations.

According to Herren, his work explores invoking vessel references in large-scale forms reminiscent of abandoned industrial tools, gaudily-colored. He uses clay in the fashioning of both stands and tables, and the pottery forms cobbled together from wheel-thrown and hand-built components.

“I aspire to attain in my work the wedding of the prosaic yet intimate qualities of functional pottery to the more assertive power of industrial tools, both relegated to an age more closely attuned to human labor and striving,” says Herren. “It is less a matter of describing a sense of loss than to invoke wonder and curiosity in the work I now produce.”

This year’s Juror is curator, writer, and archivist Kristen J. Owens, who evaluated over 90 entries submitted by museum members and selected 21 works for this exhibition.

Sign up to receive news on classes and workshops related to these exhibitions!

Hunterdon Art Museum is a 501(c)3 nonprofit, and your tax-deductible support is important to us. It ensures that the Museum continues being a vibrant part of our community. Your contributions help us maintain our beautiful historic building, which is on the National and State Historic Registers, assist us in creating exhibitions that share contemporary art from around the world, and make it possible for us to develop programs that teach skills and foster creativity. Your gifts are greatly appreciated. Contributions of $100 and more are recognized in our annual report and on our lobby donor list. We are pleased to acknowledge tribute and memorial gifts.

Programs are made possible in part by funds from the New Jersey State Council on the Arts, a partner agency of the National Endowment for the Arts; The Geraldine R. Dodge Foundation; New Jersey Arts and Culture Recovery Fund; Hunterdon County Board of County Commissioners, through funds administered by the Cultural & Heritage Commission; Hyde and Watson Foundation; Investors Foundation; The Large Foundation, along with other corporations, foundations and individuals.  The Hunterdon Art Museum is a wheelchair accessible space.  Publications are available in large print.  Patrons who are deaf, hard of hearing or speech impaired may contact the Museum through the New Jersey Relay Service at (TTY) 1 (800) 852-7899.