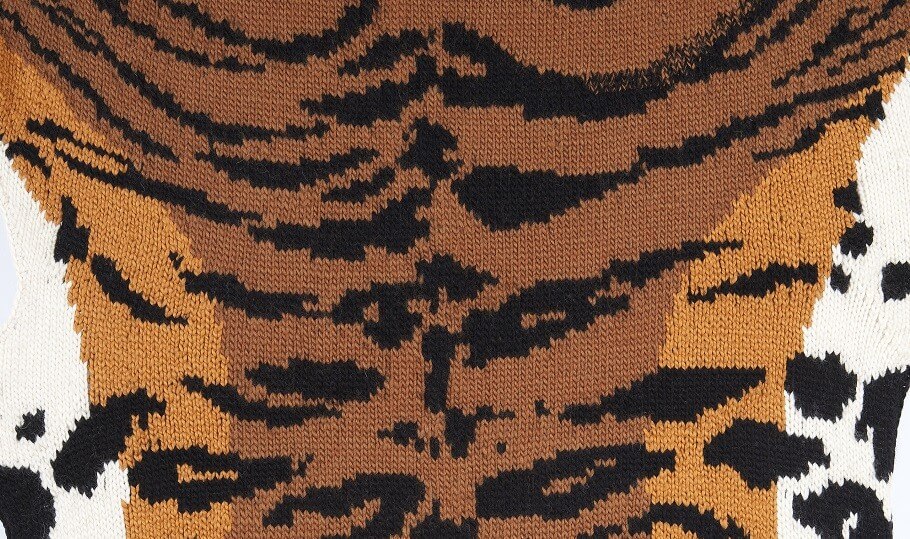 Ruth Marshall’s creations weren’t inspired by visits to art galleries or at a university class, but by working at the Bronx Zoo.

Marshall is an Australian-American contemporary textile-knit artist, whose vivid hand-knit replications of endangered animals remind us of the threat they face and the importance of wildlife conservation. Her work will be spotlighted in a solo exhibition at the Hunterdon Art Museum.

On that day, Ruth Marshall:  Knitting the Endangered will be celebrated with a reception from 2 to 4 p.m. featuring a gallery talk by the artist and refreshments. Everyone is invited to attend.

The exhibition runs until April 28.

Marshall worked at the Bronx Zoo as an exhibition sculptor for 14 years and became very concerned about the plight of endangered animals. While on the job, she had a daily reminder of one such threatened creature.

“The snow leopard enclosure was right next to where I worked, so a snow leopard was the first cat I knitted from the zoo,” Marshall said.

Marshall spends months researching the animals she knits. Charting the pelts gives her the opportunity to inspect and observe the creatures up close, and to accurately transcribe the pelts into designs.

“I learn so much from them! They give me ideas and insights – especially with the paws,” Marshall said.

Marshall hopes viewers who see her exhibition will understand how beautiful these animals are, and how important it is to save these species from extinction for the health of the planet.

Ruth was born and raised in Melbourne, Australia. With a Master of Fine Arts degree from Pratt Institute in Brooklyn, New York City, she joined the Wildlife Conservation Society / Bronx Zoo in 1995 and worked there for fourteen years as an exhibition sculptor.

Her work has widely been covered in the press and exhibited at museums including MASS Art in Boston, Museum of Arts & Design in NYC, and The Textile Museum in Washington DC. She teaches at the School of Visual Arts in the Bronx. She is represented by Dam, Stuhltrager Gallery, Berlin, Germany, and holds regular workshops and lectures about her art.

On Saturday, March 30, she’ll teach a workshop at HAM on knitting with plarn, plastic yarn made from plastic bags. Participants will learn how to crochet using this “free” yarn that can be made from plastic grocery bags. To learn more, go here!

Also, the Museum has a Leadbeater’s Possum knitting kit on sale in its lobby for $20. Half the money will be donated to the Friends of Leadbeater’s Possum, an organization that helps protect the habitat of these critically endangered Australian animals.