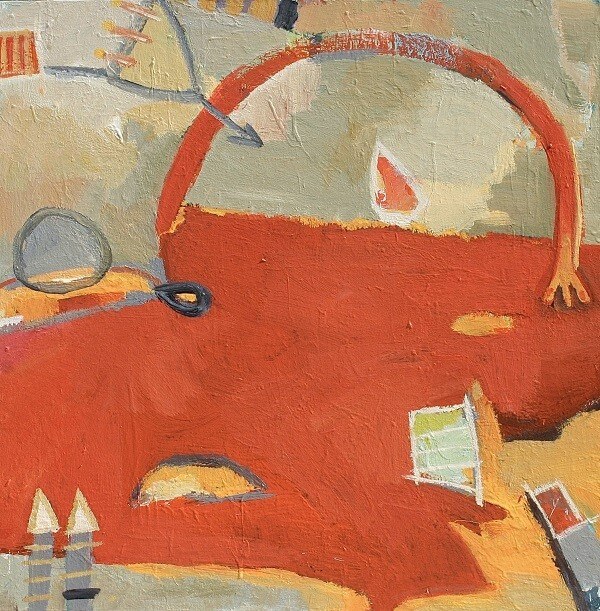 Though she’s painted for several decades, artist Maureen Chatfield still feels a thrill when stepping in front of a blank canvas.

Viewers can discover the results of her creative process in the Hunterdon Art Museum’s Member Highlight exhibition Maureen Chatfield: Emotions Through Color, opening on Saturday, March 9 from 2 to 4 p.m. with a reception that everyone is welcome to attend.

Chatfield’s work was selected from among 86 entries for the Museum’s juried Members Show in 2017.

Most of the abstract paintings included in this exhibition come from Chatfield’s Ether and Landscape series, which are impressions of experiences, and the emotions attached to them. The Landscape series arose from impressions of places she’s visited or seen; the Ether series is internal and emotional, and exists in the gap beyond conscious thought, she said.

“These works are pieces of my soul, energy and passion expressed in color, line and form,” Chatfield said.

Her paintings are intuitive responses to the many forces that shape her life – emotions that translate into color, visual memories of forms and color relationships found in the landscape and personal stories from her past.

Chatfield shies away from relating specifics about her creations, encouraging audience participation. “I try not to describe my work but rather let the viewer engage and experience,” she said. “Abstraction questions and provokes and invites viewer participation.”

The work is the result of constant experiment and change – building layers of color, form and image on the canvas revealing the underlying pentimento. Her images are rarely planned but discovered and enhanced through music. Specific rhythmic vibrations are an integral part of her creative process and helps her enter a rhythmic flow.

“As colors are reflections of emotions, the images that emerge in each segment have a similar palette reflecting where I am at that moment,” she noted.

The exhibition is being curated by Hildreth York, and runs until April 28.

Chatfield learned to paint as a teenager, and now does so full time, in addition to teaching classes at the Museum. This April, Chatfield will teach an adult class on “Painting the Modern Landscape,” which blends music and painting, while encouraging students to experiment with action painting and developing layers of color form and image to their work. In March and April, she’ll teach workshops on “The Economy of Stroke” which teaches students how to use fewer strokes and create more interest in their art by using color value to generate emotion.

“What I enjoy most about teaching is when I help change the way an artist ‘sees,’ and he or she gets that ah-haaaa moment,” Chatfield said. “It’s wonderful sharing the love of art with others who have the same passion. When they grow, I grow!”

Chatfield’s work can be found in private and corporate collections in New York, Paris and Spain, including Tiffany & Co., and Decca Records. She is represented by Rosenberg & Co’s Manhattan Gallery where her work has been seen in solo and group exhibitions. In a review, Art News called her a “natural colorist,” who “fearlessly mines the spectrum from the gorgeous reds of Matisse to the rich blacks that conjure Franz Kline’s swashbuckling brushwork and Robert Motherwell’s Elegies to the Spanish Republic to the muted nuanced shades of Richard Diebenkorn.”