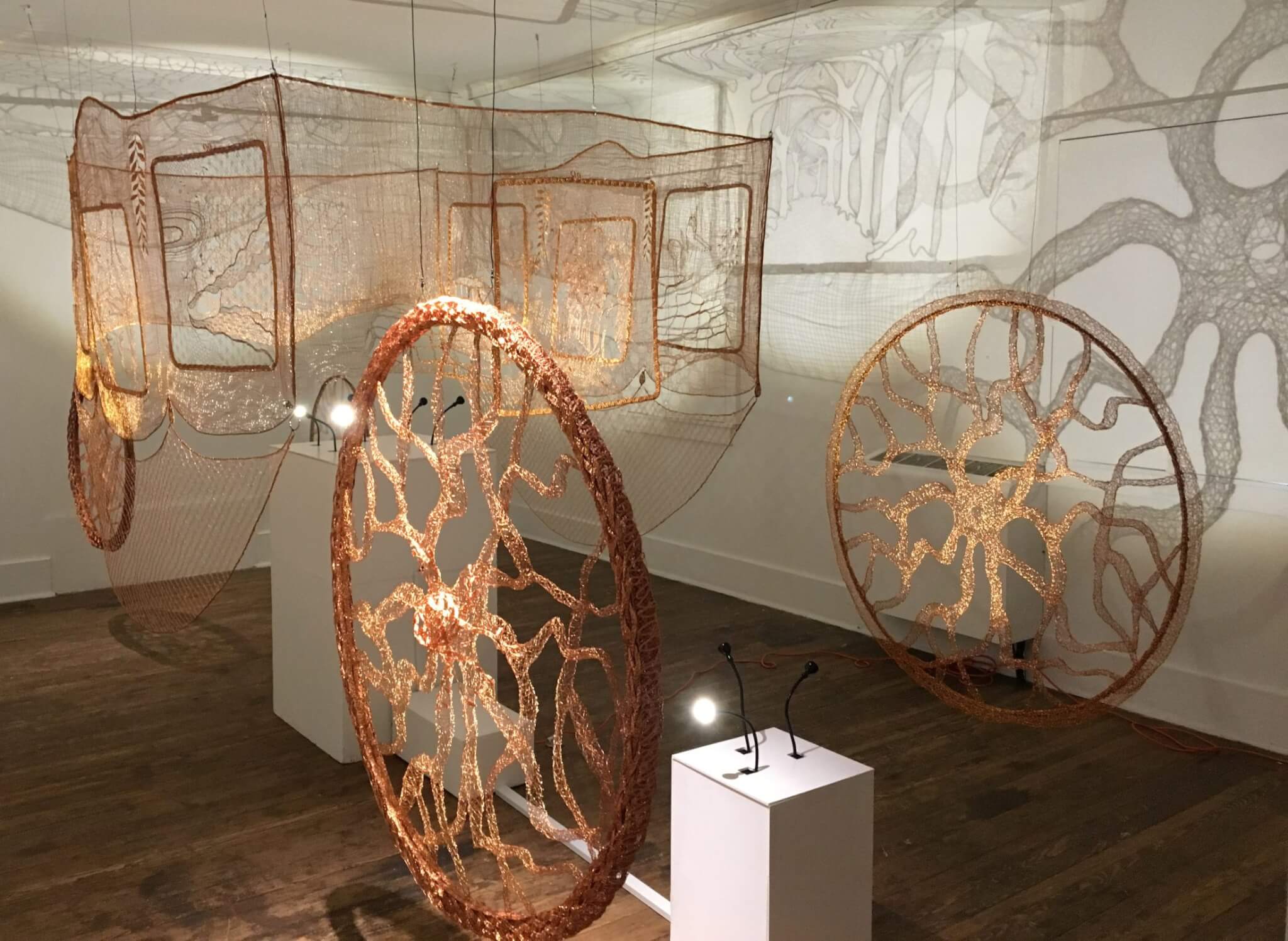 A ground-breaking exhibition highlighting how lace makers are expanding the traditional boundaries of their art form to create exciting work that investigates contemporary themes, materials and forms is at the Hunterdon Art Museum until Sunday, Jan. 6, 2019.

Lace, not Lace: Contemporary Fiber Art from Lacemaking Techniques, reveals how contemporary fiber artists are applying bobbin and needle lace techniques to a multitude of fibers and filaments in unlimited colors and textures to interpret their world.

“This is the first show in the United States to focus on contemporary art made in bobbin and needle lace techniques,” said Devon Thein, an internationally known lace expert who is curating the exhibition.

One showstopper is Lieve Jerger’s Carriage of Lost Love, which the artist has spent four decades creating. The work is a life-size carriage made of copper wire using bobbin lace technique. The Carriage of Lost Love began with just one panel, the Traveler window. But that sparked Jerger’s imagination and compelled her to build a ceremonial carriage that has been a labor of love for many years.

“I never thought of giving up, not even when wires kept breaking when I pulled them too tight,” Jerger noted. “I have used clear-coated American Standard wire gauges, as heavy as gauge 10 and as fine as 38. Even heavy gauge copper wire must be handled gently and kinks are unforgiving, but the strength and brilliance of copper wire is what seduced me.”

The exhibition features 41 works of lace art by 28 artists from around the world. Thein said she sought to create a show that demonstrated the versatility of bobbin and needle lace techniques.

Artist Pierre Fouché works in a self-designed methodology combining bobbin lace with another historical lace technique macramé. Although both are multi-element techniques, Thein said she is unsure whether anyone else has ever succeeded in moving between the weaving/braiding technique of bobbin lace, and the knotting technique of macramé in a single piece.

In his triptych called Judgment of Paris after Wtewael, Fouché took web-based news images of male protestors, some from the Occupy Movement, selected for their classical poses.

“Fouché’s work references the female nudes depicted in paintings of the myth in the academic tradition,” Thein said.

Jill Nordfors Clark presents a work that could well be taken for basketry. Although a major figure in the early needle lace revival of the 1970s when she used conventional thread, Clark became interested in using animal membranes in her work while on a trip to Alaska.

Returning home, she began to experiment with making needle lace in hog gut purchased at the butcher shop as sausage casing. This material — pliable when wet, but solid when dried — took dye easily. Clark began to work needle lace using a large needle threaded with gut, often forming the lace around a mold. When it dried and solidified, she would remove the mold. Her needle lace would no longer be fabric, but instead a rigid structure resembling sculpture.

The exhibition also includes four pieces by Milča Eremiášová, a legend in the world of Czech modern lace. The pieces in the show were selected by Dagmar Beckel-Machyckova, a student of Eremiášová. Beckel-Machyckova now lives in the United States where she is pursuing her own career as a lace artist, and has a piece in the show.

“For people who know about lace, Eremiášová’s work is Czech contemporary lace at its best, pure magic in terms of technique and artistry,” Thein said.

“Since lace technique is largely unknown, there are not many artists who work in it,” Thein said. “This show collects the work of a very large percentage of the outstanding artists who have worked in lace for the last 60 years. These artists are well known to American lace makers through their publications, but this will be the first opportunity to see their work assembled in one place.”

The exhibition Lace, not Lace: Contemporary Fiber Art from Lacemaking Techniques is generously supported by The Coby Foundation, Ltd. Support also provided by The International Organization of Lace, Inc. and Holiday Inn Clinton-Bridgewater.