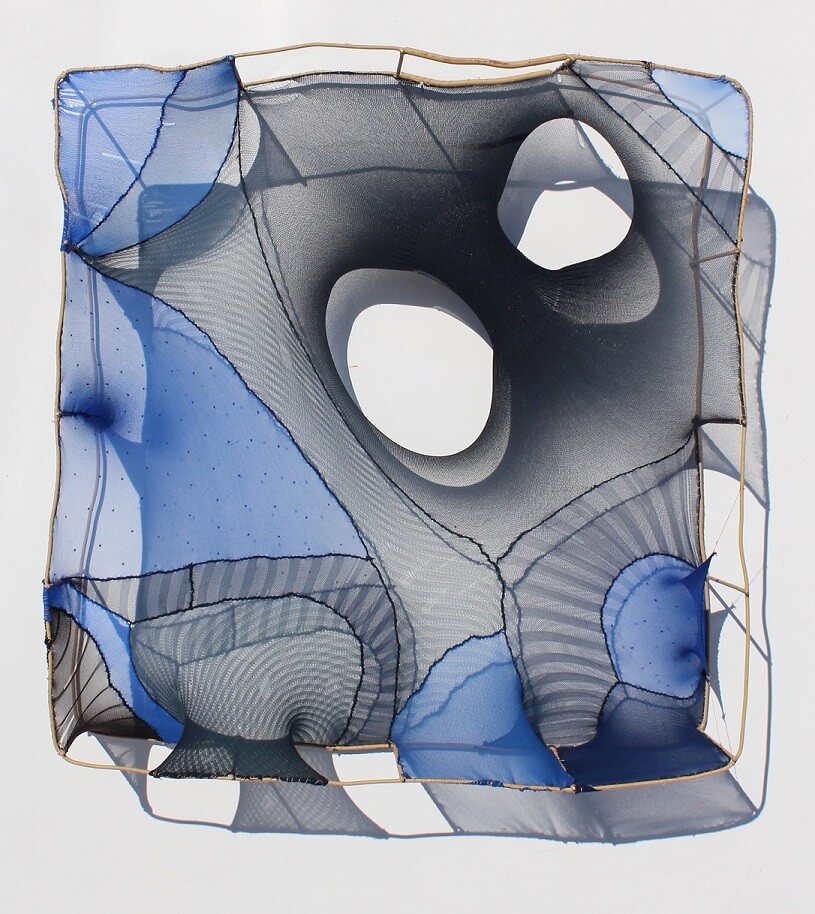 Truk is a multi-media artist who creates colorful, enchanting three-dimensional work with pantyhose, wire, a sewing needle and thread. Her solo exhibition, Katie Truk: Stretched Sculpture, opens at the Hunterdon Art Museum on Saturday May 12.

Her inspiration to incorporate pantyhose into her work began innocently enough: A high school friend bought Truk an acrylic tube of brightly colored nylons for her birthday. Entranced by the colors and material, she never wore the nylons, but kept them in the tube and displayed it as a piece of art in her bedroom. Later as an art student at Alfred College, she attempted repeatedly to include them in her projects.

“I tried different things – neon, ceramics, glass blowing – and tried to incorporate the pantyhose in everything I did, but nothing worked,” Truk said.

One day after graduating, she was playing around with pantyhose again, and started ripping it. “I felt bad because I’m not a destroyer; I don’t like negativity. So I started sewing them back together, and before you knew it, I was just sewing pantyhose,” Truk said.

Her pieces are a marriage of the sensual malleability of pantyhose and the rigidity of wire. Thread binds and extends the aggression and vulnerability, echoing life’s twists, turns, and pulling within our rigorous regulations and expectations, she notes.

“When you break it down, my work is about tension and geometry,” Truk said. “And isn’t that what the world is based on?”

During the 1980s, finding pantyhose with eye-popping hues of hot pink or yellow was easy. But a decade later, when she started creating art strictly with pantyhose, styles had changed.

“Everything was nude, black, brown and white. It was awful,” Truk said. ”Sadly, the best place where I could find colorful pantyhose were at sex shops. The pantyhose I’d find there were buttery and just exquisite to the touch and would stretch beautifully.”

She begins each piece with having a general idea of what she wants to create, but lets the materials lead her. “If I sketch something out and try to stick with it, it will drive me crazy,” Truk said. “You will get a color you want to use — this yellow is exactly the right shade I want for this piece — but the pantyhose might not stretch as far as your imagination wants it to. So, there’s a lot of give and take.”

Truk’s work has appeared in more than 60 solo and group shows. She has also taught art classes in New Jersey for nearly 20 years, and will lead a workshop at HAM on Pantyhose Sculpture on May 19. More information about the program can be found at www.hunterdonartmuseum.org.

Stretched Sculpture includes pieces from several of her past shows and some new ones. She hopes those who view her art will gain a fresh appreciation for pantyhose.

“It’s so much more than a torture device for women,” Truk said. “Seeing a person smile when they look at my art is the greatest gift.”

This unique show of pantyhose art runs – no pun intended – until September 2.