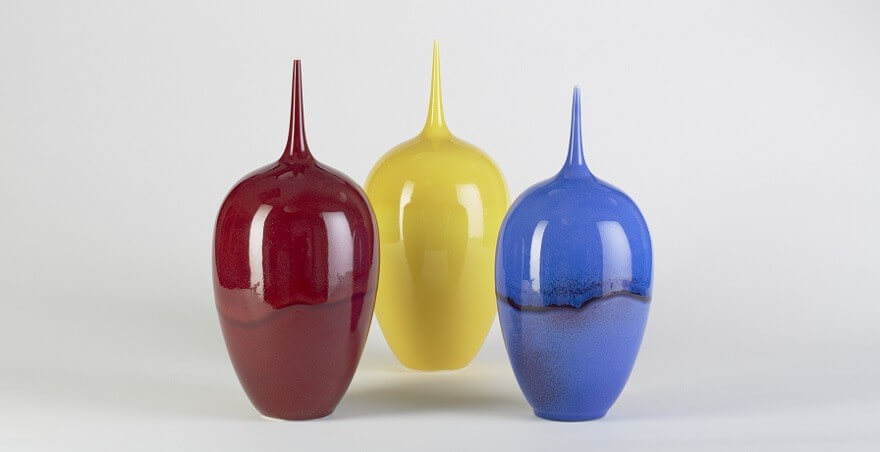 That persistence and insatiable curiosity helped fuel his 17-year successful effort to re-create the formula for the imperial yellow glaze of the 15th-century Ming dynasty. The glaze is one of his most remarkable discoveries. By blending technical precision and artistic vision, his one-of-a-kind ceramic pieces reflect his dedication to a purist aesthetic.

In “Cliff Lee: Porcelain Master” viewers can get a close look at Lee’s meticulously carved and glazed porcelain pieces. The show runs through Jan. 5, 2020 and includes 26 works, including several new pieces.

Lee came into prominence in 1993 after being invited to contribute a piece to the White House collection of American crafts. Two years later his work was in the permanent collection of the Smithsonian American Art Museum’s Renwick Gallery. Lee’s Prickly Melons with its imperial yellow glaze caught the attention of the Metropolitan Museum of Art, which acquired a pair for its permanent collection – a rare distinction for a living artist.

This all occurs for someone who started out in a career far removed from art: neurosurgery.

Lee worked long hours performing delicate brain surgeries. One day, while chatting with a patient, he casually mentioned that he was looking for a hobby. The patient suggested pottery, and Lee’s curiosity was piqued.

Lee fell in love with clay the moment he touched it. Soon, he informed his colleagues that he was leaving the medical profession to pursue his passion full time.

Neurosurgery and pottery may sound like two completely different callings, but commonality does exist: The need to perform very detailed and intricate work with your hands, the need for patience and for persistence. And, neither field allows any margin of error whatsoever.

Lee started out by creating clay vessels painted with standard glazes but then switched to porcelain.

The switch must have seemed organic for an artist whose parents collected Chinese art and took him to museums where he could get a closer look at porcelain pieces.

Because of porcelain’s unforgiving nature spurred the artist to begin mixing his own glazes and firing his own work in a kiln. His childhood exposure to Chinese art impelled him to undertake his long journey to reformulate the previously lost imperial yellow Chinese glaze.

Lee says he’s been asked many times how he creates his glazes or does his intricate carving. And his answer is always the same. “You need to learn. You need to figure it out by yourself.”

This exhibition is sponsored in part by Rago Auctions and the Lenore G. Tawney Foundation.