“Humans are emotional creatures. Individuals feel a diverse range of emotions even during a short time or on a small occasion. Emotions are formed naturally through many experiences of individuals and there are an innumerable number of ways to express emotions. Of these, the artist’s task is to conduct analysis of these experiences from the perspective of emotion and to sensitively materialize them.

My work is based on psychological observations that are representative of voices we all hear inside. I make ceramic figurative sculptures that describe emotions from my life as a diary. By exploring expressive possibilities of my visual language, the figurative form and its multi-colored surfaces reveal the abstracted version of my interiority.

Creation of ceramics requires endurance. Looking at its chemical changes through the process of firing, it is a creature granted with invisible power, which means its outcome belongs to nature. Ceramics are regenerated by fire, the most fundamental aspect of nature. Borrowing human hands, it cannot create emotions unless the will or passion of the artist is naturally melted down upon it.

Through my works, I aim to express the topic of emotions outwardly by attempting to describe a various range of psychological states existing in our environment with visual formation of colors and figurative form.” ~Ahrong Kim 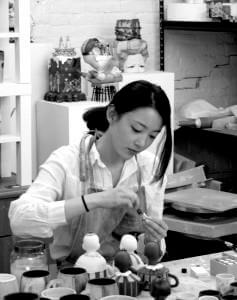 Ahrong Kim is a New York based artist born in South Korea. She received a BFA in Ceramics from Kon Kuk University in South Korea in 2008 and an MFA from the Rhode Island School of Design in 2013. Her works have been exhibited at Kristen Lorello, New York, NY, 2021, The Clay Studio, Philadelphia, PA, 2017, George Billis Gallery, New York, NY, 2016-17, Strohl Art Center, Chautauqua Institution, Chautauqua, NY, 2019, and the Society for Contemporary Craft, Pittsburgh, PA, 2018, among other venues. She has completed residencies at Guldagergaard, Copenhagen, Denmark, 2016 and the Office for the Arts at Harvard University, Boston, MA, 2013-14. From 2014-2018 she was an artist in residence at The Clay Studio, Philadelphia, PA, where she was also an instructor in ceramic sculpture. Kim is the recipient of an Excellence in Clay award from the Philadelphia Museum of Art Craft Show, Philadelphia, PA, 2018 and received the honor of Best in Show during the 7th Workhouse Clay International, Workhouse Art Center, Loton, VA, 2017. Her works are included in the collections of the RISD Museum, Providence, RI, Fuller Craft Museum, Brockton, MA, and the Betsy Ross House, Philadelphia, PA, among others

Please consider making a tax-deductible donation so that we may continue being a place to connect people to contemporary art, craft, and design in ways that educate, challenge, and inspire.

Programs are made possible in part by funds from the New Jersey State Council on the Arts, a partner agency of the National Endowment for the Arts; The Geraldine R. Dodge Foundation; Hunterdon County Board of County Commissioners, through funds administered by the Cultural & Heritage Commission; Hyde and Watson Foundation; Investors Foundation; The Large Foundation, along with other corporations, foundations and individuals.  The Hunterdon Art Museum is a wheelchair accessible space.  Publications are available in large print.  Patrons who are deaf, hard of hearing or speech impaired may contact the Museum through the New Jersey Relay Service at (TTY) 1 (800) 852-7899.