Could you tell me a little about the thought process involved in making the selections for this exhibition? What you were looking for when you decided which pieces to include?

I wanted to present pieces that would show the versatility of bobbin and needle lace techniques. These techniques were developed in the 16th and 17th century because weaving and embroidery were not sufficiently fluid to realize the luxury textiles craved by the aristocracy. They represent a staggeringly array of techniques and effects that excite fiber artists.

When I chose pieces for the exhibition I wanted to include artists who had been major figures in the lace revival of the 1970s, as well as younger artists who had benefited from their innovations and discoveries.

From the time when you first thought about this exhibition to the point where we are now with the exhibition about to open, were there any changes in that thought process or did you pretty much stick with the original conception? If there were changes, what brought that on?

Originally, I had made it an absolute rule to include only artists who had extensive exposure in the larger art world, and who had impressive artist websites because lace, like many fiber arts, is still establishing its legitimacy as a fine art. However, after the proposal had been accepted, I realized that there were gaps in the story that I wanted to tell that could not be filled only by artists with good websites

Ros Hills, whose riotously colored needle lace Purse was selected by the Victoria and Albert museum to represent contemporary lace in its collection is an artist who wrote several iconic books but has not created a website for herself. She is one of a group of three lace artists who are friends and artistic collaborators with deep roots in the lace English lace revival of the 1970s forming an interesting creative triumvirate. Jane Atkinson, who has an excellent website, and Denise Watts who has none at all, are the other two. It is illuminating to consider the three together because their artistic practice is intertwined. So, I waived my rule about websites because it would be like telling the story of Picasso without discussing Matisse.

Also, I had decided to exclude wearables. The overlap between lace as a fiber art and lace in fashion is problematical. Lace used in fashion these days is almost exclusively machine made and conforms to the preconceptions about lace that I am trying to overturn. So, does the inclusion of high end pieces of wearable art such as Lauran Sundin’s very sculptural Typhoon, or Lenka Suchanek’s Genoese Lace Necklace blur the distinction I am trying to make? I am taking a chance. 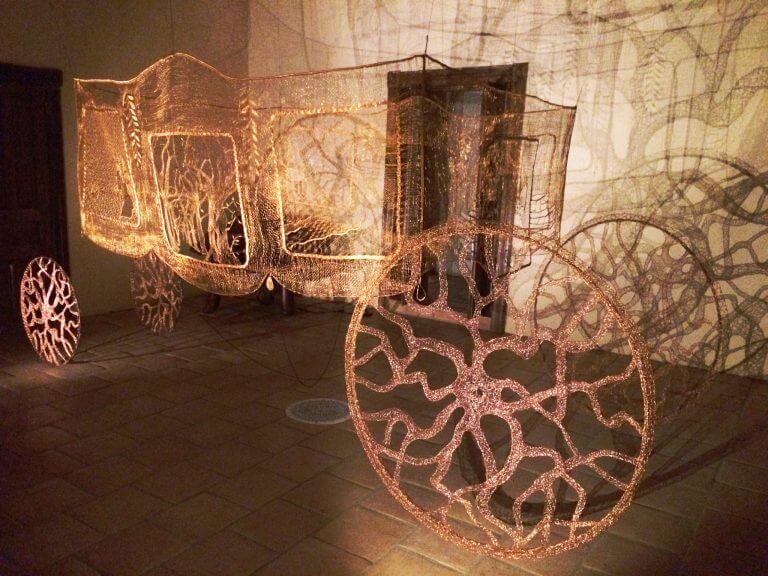