When renowned ceramic artist Toshiko Takaezu first gazed upon the charming waterfall beside the Hunterdon Art Museum in the summer of 1964, she knew she had found just what she was looking for: a home and a peaceful place where she could focus on her work.

“What a beautiful scene,” she remembered thinking.

That inspiring view brought her from the Midwest to Clinton. She opened a studio at the historic Music Hall to create art and spent nearly five decades donating her time and energy to the Museum, playing a vital role in its growth and passion for contemporary art.

Now that splendid space beside the waterfall is named in her honor: The Toshiko Takaezu Terrace.

“Naming the terrace in Toshiko’s honor serves as a tribute to an artist who was intimately involved with the Museum and whose inspiring work influenced generations of artists,” said Marjorie Frankel Nathanson, our executive director.

All the ceramic tiles on the terrace commemorating Takaezu were created at The Takaezu Studio in Quakertown and fired in her kiln. There are four blue tiles which hold special significance.

“Toshiko was well known for her blue glaze in her work,” said Don Fletcher of The Takaezu Studio in Quakertown. We had a little bit of glaze left over that was hers, and we wanted to use it to add a little bit of her personality to the terrace. The glaze is a direct representation of her spirit.” 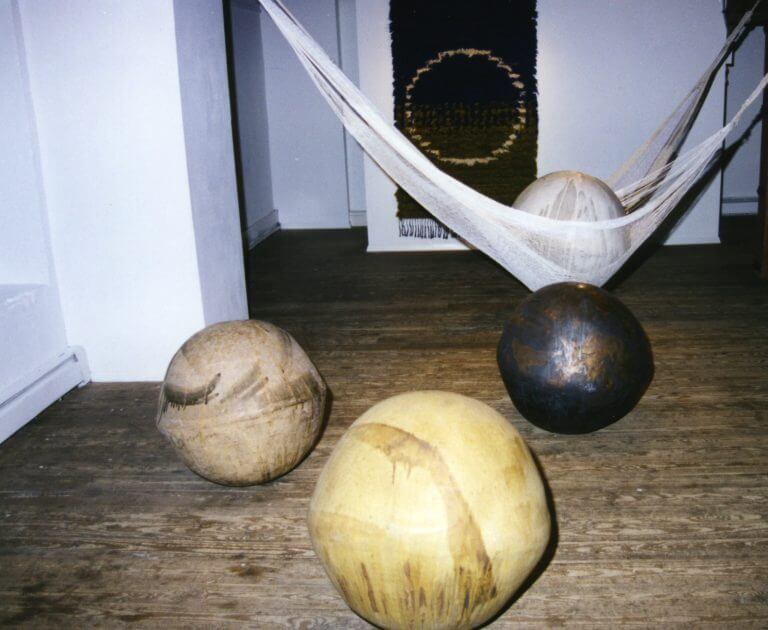 Takaezu’s work evolved early on from traditional small utilitarian vessels into the closed forms for which she became known worldwide. The New York Times noted, “[In her] stoneware and porcelain works, some small enough to fit in the palm of one hand, others monoliths more than six feet tall, Ms. Takaezu blended the expressive bravura of painters like Jackson Pollack and Franz Kline with the calm, meditative quality of traditional Japanese pottery in forms suggestive of acorns, melons or tree trunks.”

Two of Takaezu’s pieces are on display at the Museum including Three Graces, which can be found appropriately enough, in the terrace garden. Takaezu had created Three Graces as she sought to experiment in her expanded studio space with bigger kilns to create works on a larger scale. Three Graces – representing love, beauty and wisdom – are large cylindrical cast-bronze pieces that undulate from their base. The piece is on long-term loan from The Takaezu Studio.

Takaezu was born in Hawaii, studied at the Cranbrook Academy of Art in Michigan under a scholarship, before teaching at the University of Wisconsin and the Cleveland Institute of Art. She said she moved to Clinton because she “wanted a quiet studio where I [could] concentrate on my work.” A few years later, she began teaching classes at Princeton University, and did so until 1992.

In the 1960s, Takaezu opened a shop in the Museum to sell the work of fellow artists. In 1967, she organized and planned an Invitational Craft Exhibition that featured the works of prominent artists including George Nakashima, a leading innovator of 20th century furniture design and a father of the American craft movement; and Lenore Tawney, whose monumental sculptural weavings helped create the genre of fiber art. More than 700 people flocked to the Museum for the show’s opening.

Takaezu’s work was celebrated in three Museum exhibitions, including a 1998 show that filled the Museum’s three floors with her ceramics, sculptural forms, painting and weaving.

In 2010, the Emperor of Japan presented her with the Konjuhosho Award conferred on individuals who have made significant contributions to Japanese society, and she chose to have the presentation at the Hunterdon Art Museum. A year later, her memorial service was held at the Museum, near the idyllic waterfall she adored. 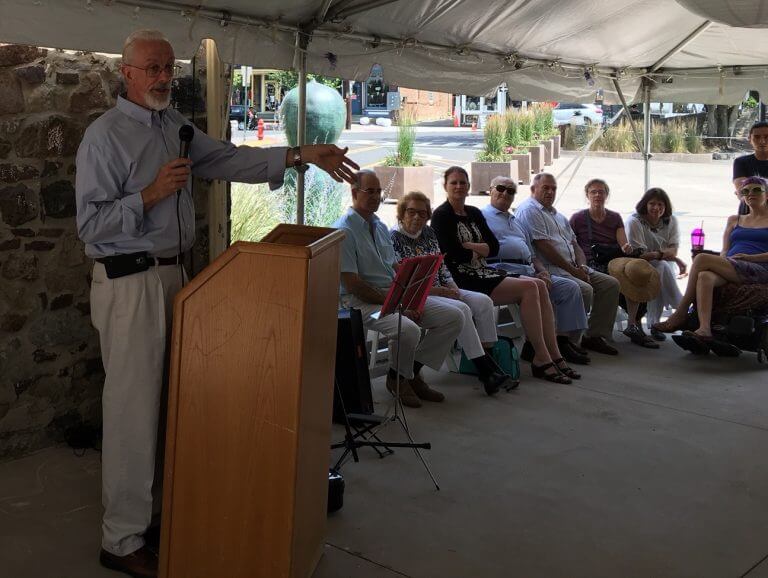 Don Fletcher speaks at the Terrace dedication at HAM recently.